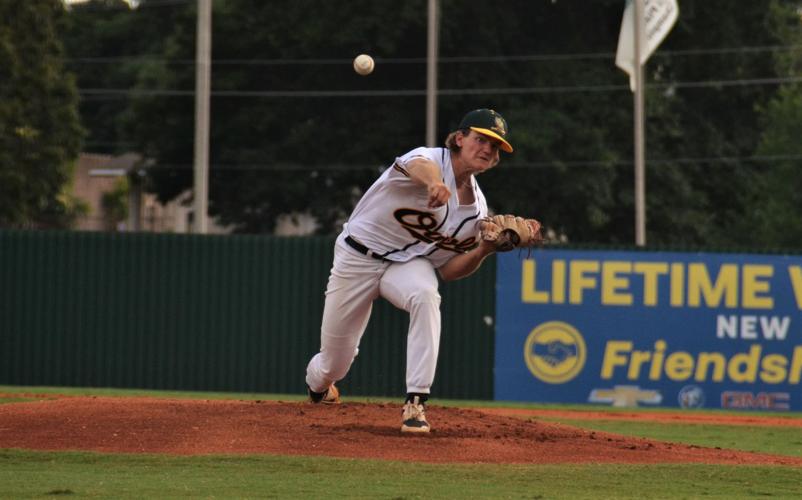 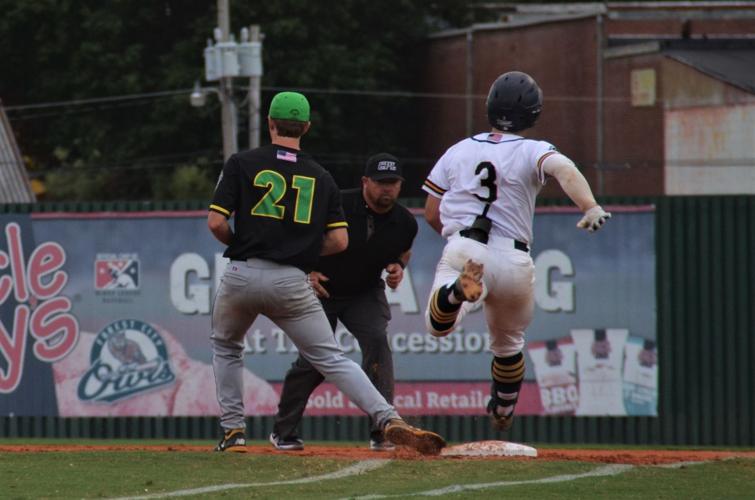 Forest City’s Three Hillier hustles down the line as Asheboro’s Bryce Marsh awaits the throw during Monday night’s matchup between the Owls and the Zookeepers at McNair Field. 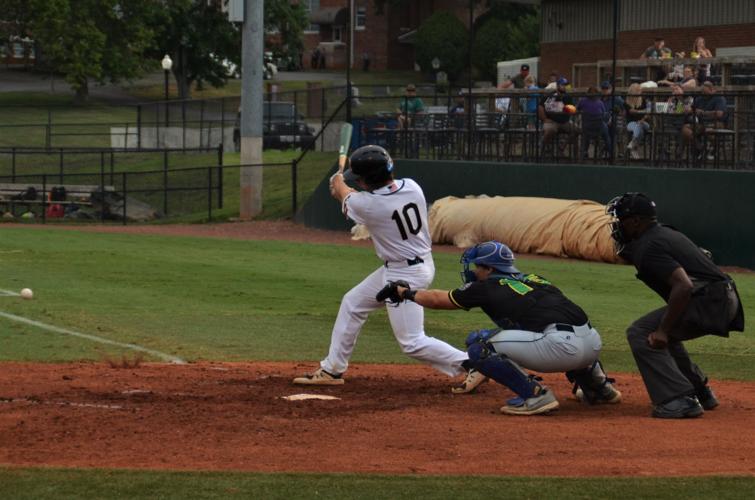 Forest City’s Three Hillier hustles down the line as Asheboro’s Bryce Marsh awaits the throw during Monday night’s matchup between the Owls and the Zookeepers at McNair Field.

FOREST CITY — The Forest City Owls had it rolling on all cylinders Monday night as they hit, pitched and played defense, defeating Asheboro by a 9-3 score. The Owls got a quality outing from starter Casey Young who went 4.2 innings with no decision, and nice relief work from Zach Stephenson and Brett Porthan. At the plate, Dalton Hodge would post a three-hit day to lead the team.

Head coach Connor Dailey was happy to see the team put it all together.

“When the bats get going early, good things happen,” Dailey said. “We were good on the hill tonight with Casey throwing strikes. I thought we came up big a couple of times to prevent them from having the big inning. We got some good defense to keep them off the bases, so it was a complete win. The key to winning in this league is simply to throw strikes. The wood bats give you a shot. When you throw strikes, you win. Walk less, stress less, win more.”

Asheboro took the early lead with Bryce Marsh dropping a bomb over the right field fence to put the Zookeepers up 1-0.

In the third inning, Asheboro added another run as Kennedy Jones got it started with a single up the middle. Marsh was hit by a pitch to put runners on first and second base. Michael Zarillo then laced a single to right field, scoring Jones and putting the Zookeepers up 2-0.

The Owls bats came alive in the bottom of the inning, exploding for five runs. Matthew Jonas led off with a walk, with Chipper McGinnis reaching on a fielder’s choice. Alex Kahn then stepped in and tied the game with a two RBI double to left field. Austin Turner singled to right field to put two runners on base for Dalton Hodge.

Hodge responded with an RBI single to score Kahn. With two runners on base, David Lewis then ripped a double down the left field line, scoring Turner and Hodge to make it 5-2 Forest City.

In the top of the fourth, Asheboro got one run back as Trent Youngblood led off with a double to the wall in center field. Jones made it 5-3 with an RBI single to left field.

Forest City added a run in the bottom half as McGinnis singled up the middle, and Kahn moved him up with a single of his own. Hodge brought McGinnis home with an RBI single to push it to 6-3.

The Owls added a run in the seventh inning on a single from Lewis and a double from Garrett Dill to make it 7-3.

In the eighth, Forest City added two more runs on base hits from Kahn, Hodge and Three Hillier moved the score to 9-3 where it would remain.

Hodge led the Owls at the plate with 3-for-5 hitting on the evening. Lewis picked up two hits on the night.

Forest City pitching was excellent, with starter Young going 4.2 innings with two earned runs and five strikeouts. Middle reliever Stephenson picked up the win and closer Porthan came in with no outs and two on base in the eighth inning and throw gas to put out the fire.

“I came in the game in a bit of a tough situation and was fortunate to get us out of it,” Porthan said. “I was just filling up the zone and trusting my stuff. Good things happen when you are throwing strikes.”

Forest City (7-12) will be home all week and squared off with High Point-Thomasville on Tuesday for a double header. After a much needed day off on Wednesday, they will be back in action at McNair Field on Thursday when Martinsville comes to town. First pitch will be at 7:05 p.m.