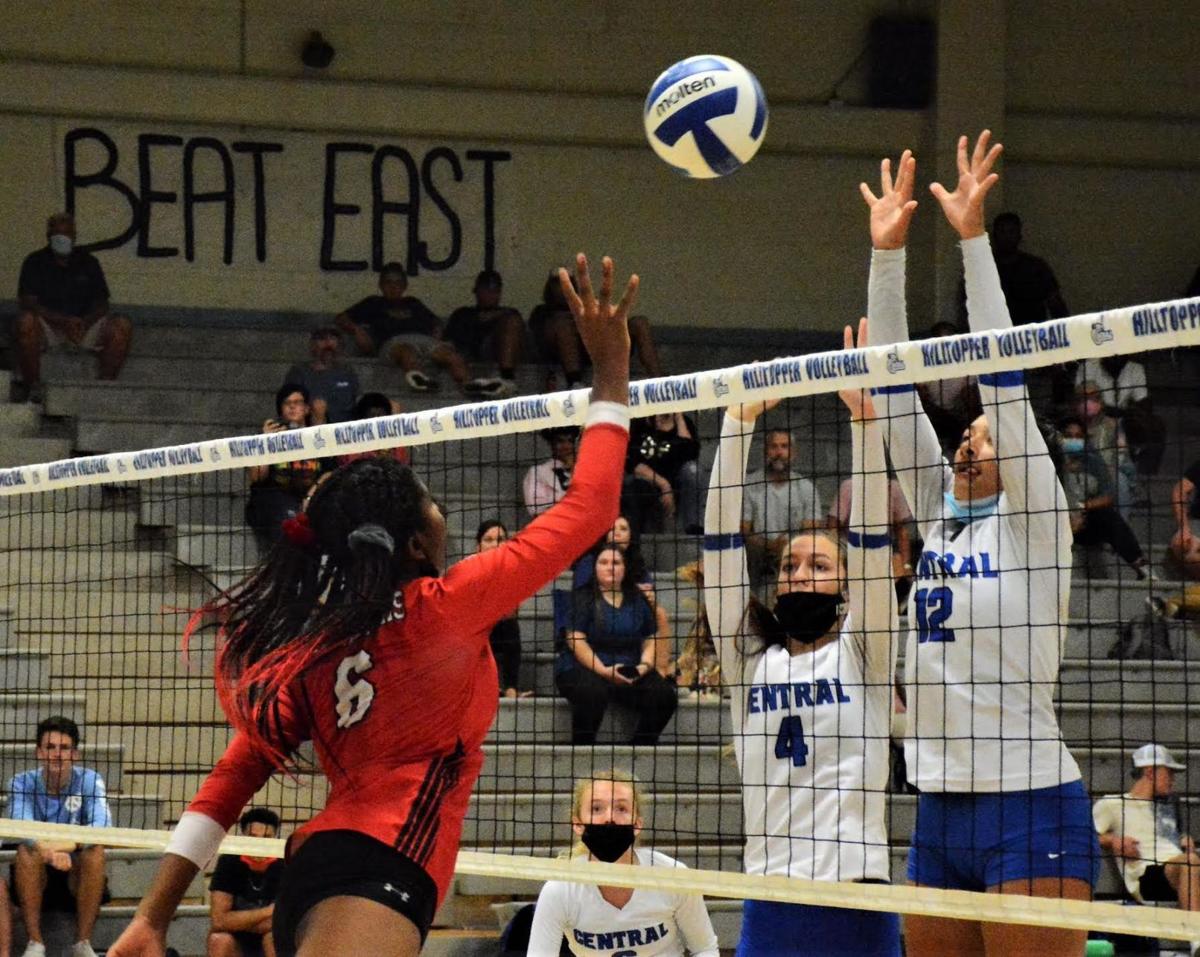 East Rutherford’s Ashleigh Jones pushes the ball across the net as R-S Central’s Hannah Newton (4) and MaKenzi Searcy (12) build a wall during Tuesday’s volleyball matchup between the Lady Cavaliers and the Lady Hilltoppers. 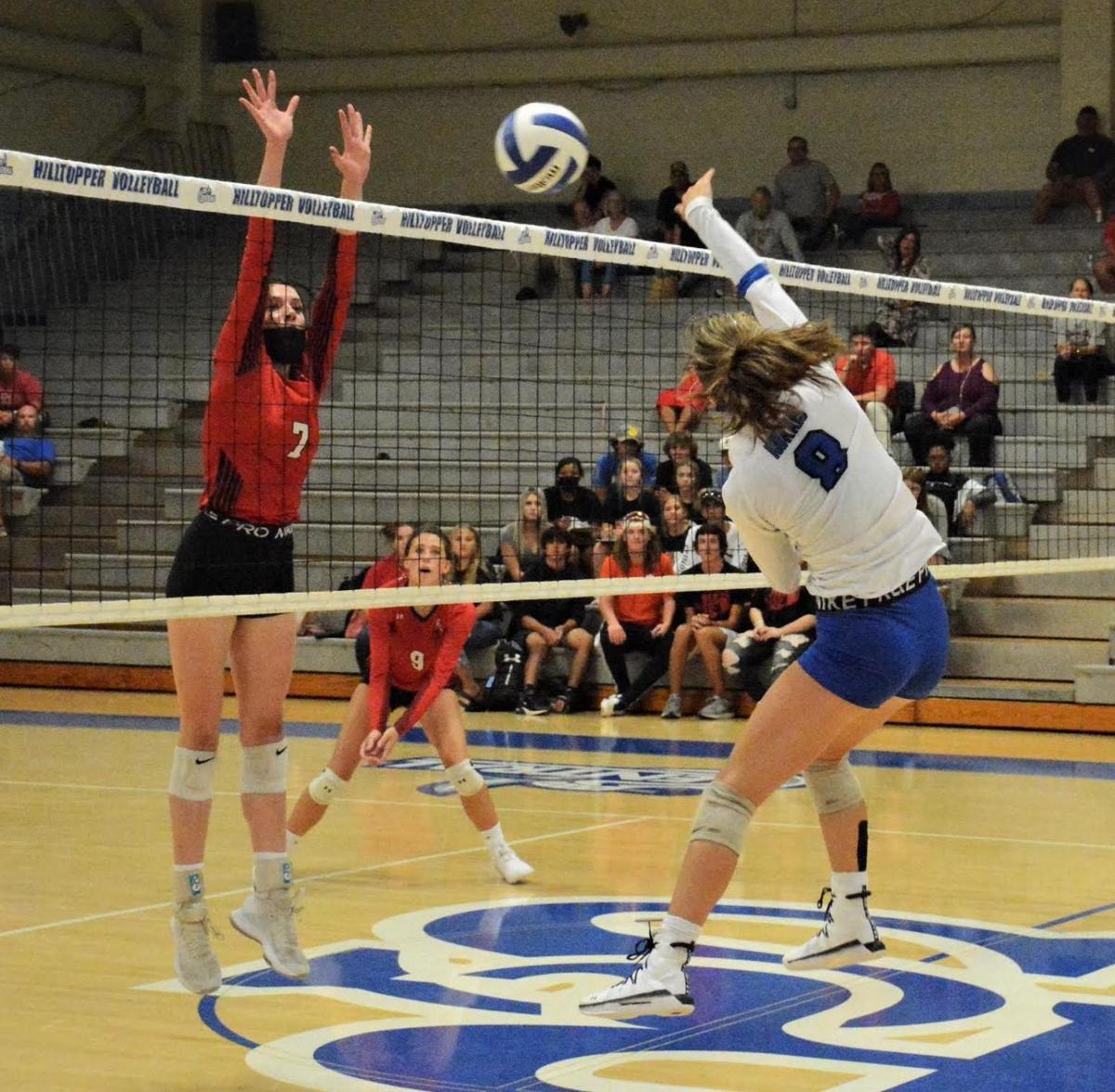 East Rutherford’s Ashleigh Jones pushes the ball across the net as R-S Central’s Hannah Newton (4) and MaKenzi Searcy (12) build a wall during Tuesday’s volleyball matchup between the Lady Cavaliers and the Lady Hilltoppers.

RUTHERFORDTON — It is always a good matchup when East Rutherford and R-S Central face off on the volleyball court. Tuesday was no exception as the Lady Cavaliers paid a visit to “The Palace.” The Lady Hilltoppers beat back a strong East Rutherford rally to record a 3-0 sweep of its cross-county rival, (25-15, 25-11 and 27-25.)

R-S Central assistant coach Nicole Hansen, subbing for head coach Ryan Sherburne, improved to 2-0 as a head coach, and had nothing but praise for the Lady Hilltoppers.

“This was a genuine team win and that is what stands out to me,” Hansen said. “Whether they were in the game or on the bench, everyone was working together. I told them last game that I wanted them to improve their mental toughness and they did that today. Sometimes, like today, that can be the difference in a tight match. In an emotional matchup like this rivalry, every little thing adds up.”

In the first set, it looked as if the Lady Hilltoppers would cruise to the win. After East Rutherford took a 1-0 lead, R-S Central’s Madi Ross served her squad to a 10-1 advantage before the Lady Cavaliers could put a stop to it. Then, it was East Rutherford’s Ashleigh Jones who would lead her team on a run, drawing to within two points at 13-11. The Lady Hilltoppers were able to pull away with strong play up top from MaKenzi Searcy and Aziyah Rudisill. R-S Central eventually claimed the set, 25-15.

In set two, R-S Central would dominate the front line, leading it from the beginning. East Rutherford competed, keeping it close until R-S broke it open at 7-5. The Lady Hilltoppers would go on a 17-6 run to finish out the set, 25-11.

In the third set, East Rutherford looked like a different team. The Lady Cavs would draw first blood and would trade points with R-S until the Lady Hilltoppers would take the lead at 9-8. The two teams would battle it out until East Rutherford would tie it up at 19-all. East Rutherford’s Sequoyah Lowrance and Jones kicked it up another notch, going blow-for-blow with Searcy and Rudisill at the net. After ties at 21, 22, 23, 24 and 25, R-S Central pulled it out 27-25.

“We started slow, but continued to work on it and in the third set, we were almost there,” Goforth said. “We need to work on that third ball. We gave up too many pushes and didn’t really get any heat on it. When you play a good defensive team like R-S Central, you have to get something on the ball to get it in the hole. The front line started to come around in the second set. I am very proud of the way we fought back, especially in the third set. We are still growing and learning every game. I think we will look much different the second time around in the conference.”

“During conference season, we are playing the same teams and losing to the same teams, so playing for pride in our county takes on a bigger meaning,” Walker said. “We started slow, but really played well in the third set. We just need more consistency if we are going to compete with everyone in the conference.”

R-S Central’s Searcy was just happy to get the win.

“I thought we played well overall,” Searcy said. “Now that we are halfway through the conference season, we know what is ahead of us. We showed a lot of mental toughness tonight, especially in that third set. That is what it is going to take to win in this conference.”