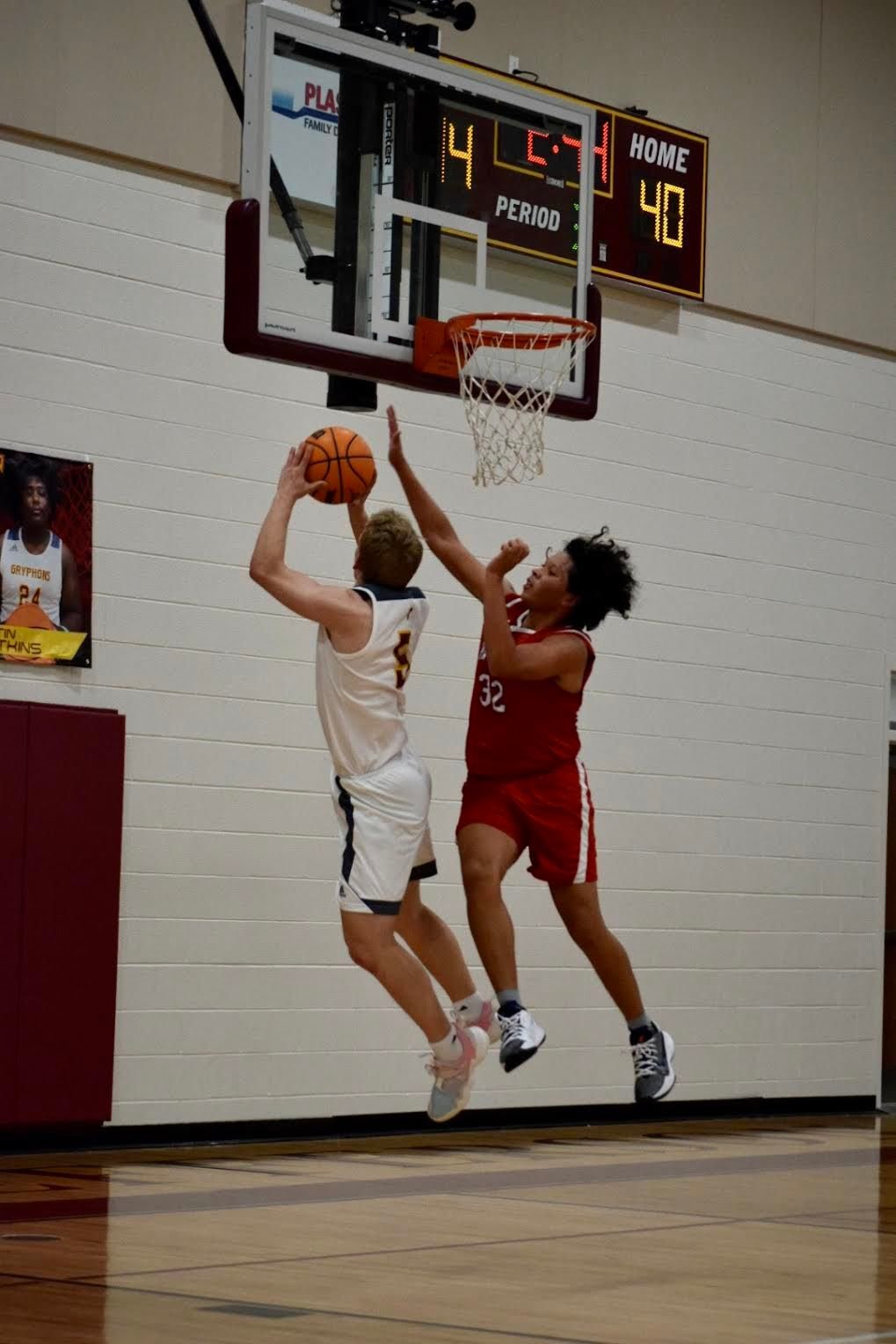 Above left: TJCA’s Isaiah Hicks goes up for a shot as PCC’s Devon Tharp defends. Hicks finished with 26 points, 11 steals, 8 assists and 5 rebounds in the 73-43 win. Above right: TJCA’s Emma Lineberger puts up a shot over the outstretched hand of a PCC defender. Lineberger pulled down 11 rebounds to lead the team in the 54-50 loss. 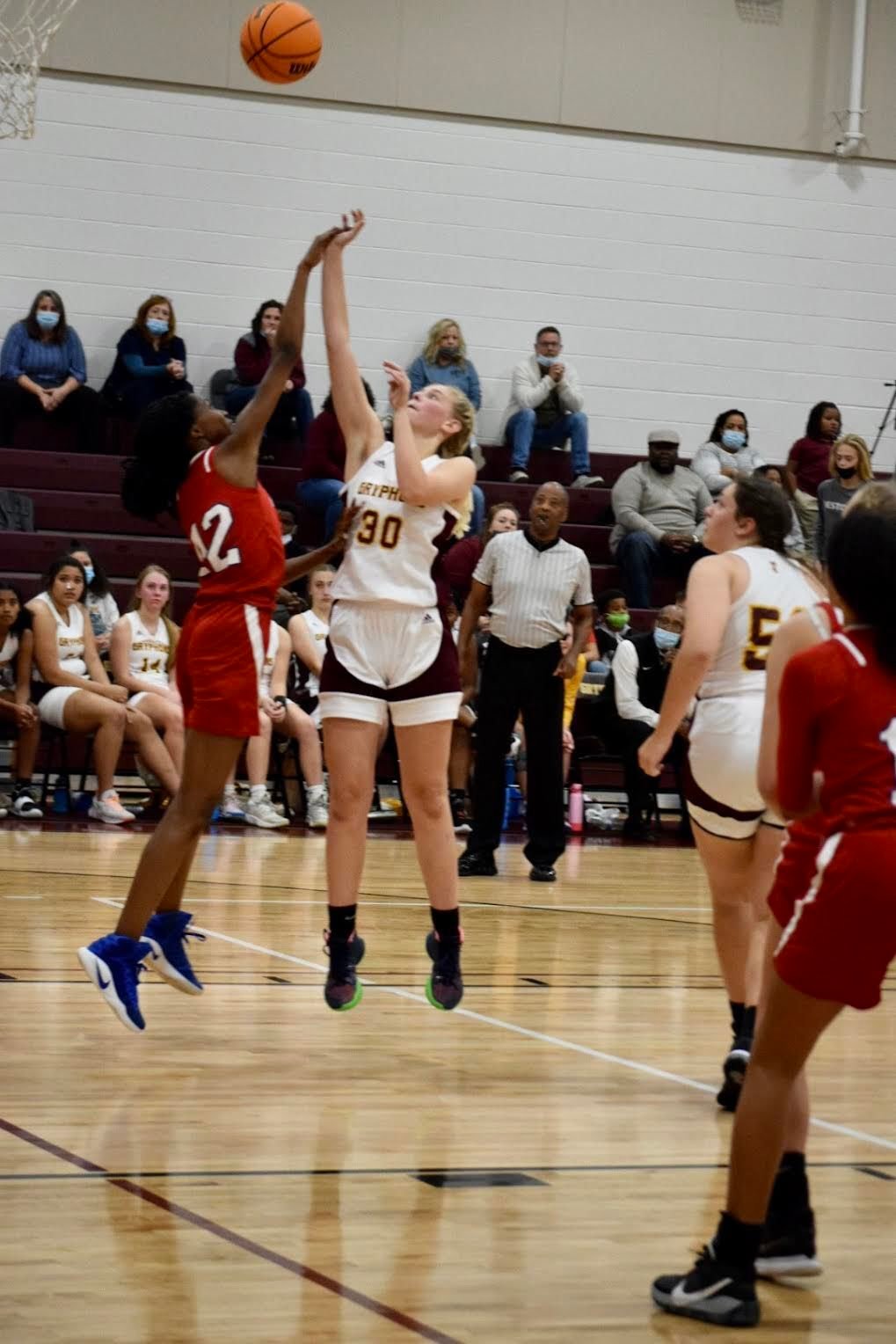 TJCA's Emma Lineberger puts up a shot over the outstretched hand of a PCC defender. Lineberger pulled down 11 rebounds to lead the team in the 54-50 loss.

Above left: TJCA’s Isaiah Hicks goes up for a shot as PCC’s Devon Tharp defends. Hicks finished with 26 points, 11 steals, 8 assists and 5 rebounds in the 73-43 win. Above right: TJCA’s Emma Lineberger puts up a shot over the outstretched hand of a PCC defender. Lineberger pulled down 11 rebounds to lead the team in the 54-50 loss.

TJCA's Emma Lineberger puts up a shot over the outstretched hand of a PCC defender. Lineberger pulled down 11 rebounds to lead the team in the 54-50 loss.

AVONDALE — In the first regular season basketball contests in the new gymnasium at Thomas Jefferson Classical Academy (TJCA), the Gryphons split with the Piedmont Community Charter (PCC) Patriots as the varsity boys team pulled away late for a 30-point win, while the varsity girls dropped a tight four-point affair on Monday night.

For the first 21/2 quarters of the game, the teams were even as the Gryphons held a 38-34 lead, but beginning at the 4:59 mark of the third quarter, TJCA (1-0) went on a 35-9 run to pull away from a pesky PCC squad. Isaiah Hicks finished the game with 26 points, 11 steals, 8 assists and 5 steals. Kaden Fenner and Malachi Prescott each added 10 points.

The Patriots opened the game in a box-and-one defense, which gave the Gryphons some trouble, but Justin Watkins and Dakota Twitty were a load inside, combining for eight points as the Gryphons jumped out to a 10-3 lead. Lawson Taylor would add a baseline three, but PCC (0-1) battled back and a Victor Pless three at the buzzer, brought the Patriots with five, 16-11.

In the second quarter, both teams matched each other shot for shot with Prescott and Xavier Wilcher trading triples, before the Gryphons created separation. Kaden Fenner collected a putback off a missed free throw and then stole the ball on the next possession. Hicks would then find Jayden Watkins in transition for the bucket as the Gryphons led 30-22. The Patriots responded with a Wilcher three, which Hicks answered with a triple of his own as TJCA led 35-29 at the break.

The Gryphons flexed their muscles on the offensive glass in the third quarter, compiling 11 offensive rebounds. After taking a 40-34 lead on a Hicks steal, in which he dove on the floor twice to get, and bucket, the Gryphons would take their first double-digit lead, 44-34 late in the third on a Watkins steal and outlet pass to Hicks for the lay up. Fenner would add a layup just before the horn sounded to put TJCA ahead 48-38 after three quarters.

Continuing the defensive adjustment into the fourth quarter, the Gryphons forced the Patriots in to 14 turnovers as Hicks went off for 12 points to go along with triples by Hunter Plaster and Fenner. Prescott would add four points of his own as TJCA outscored PCC 25-5 in the final frame.

“We went from a man to a zone and you hate to show everything you do in game one, but sometimes in the first game of the year, you have to mix and match and find out what you’re good in early and that’s what we were good in early,” said TJCA head coach Steven Jones. “I thought by going to that, we had so much more energy in that than we did in our man. You saw us pick up a few steals and you saw the momentum of the game change. And then on the back end we were knocking down shots off those steals and getting points off those steals. When that change happened, that’s when you saw the score separate a little bit.”

The varsity girls game was a game of runs as both teams had their fair share of momentum swings, but in the end, the Lady Patriots would put together one final, game-clinching run.

Your Report Card: Iowa vs. Nebraska

By the numbers: Explaining how ASU beat Arizona in Saturday's Territorial Cup game

PCC (2-1) opened up a 7-0 lead out of the gates as the Lady Gryphons struggled from the floor early, but that changed quickly. TJCA (0-1) responded with an 11-0 run behind six points from Kaitlyn Rowe, who finished with a game-high 23 points, three points from Emily Short and a basket by Breasia Ussery as the Lady Gryphons led 11-10 after a quarter, using full-court pressure to force several Lady Patriots turnovers.

The Lady Gryphons opened the second quarter with a 6-0 spurt to grab a 17-10 lead, but PCC responded with an 11-0 run to claim a 21-17 advantage. Both teams traded buckets the remainder of the quarter as the Lady Patriots led 30-23 at the break.

Out of halftime, PCC extended its lead to 12 with a 5-0 run, but back-to-back Rowe triples cut the deficit to six. After a pair of baskets, Rowe hit another three as TJCA trailed 39-34. Both teams would add three more points as the Lady Gryphons trailed 42-37 at the end of the third quarter.

TJCA cut the deficit to one with a 4-0 spurt by Ussery and Short, before PCC stretched its lead back out to six, 49-43. The Lady Gryphons responded with a 7-0 run as Emma Lineberger scored on a putback and Rowe drilled her sixth triple of the night before Short would dish to Rowe for a floater, giving TJCA a 50-49 lead. PCC would close the game out on a 5-0 run to come away with the 54-50 win.

“In the first half, we couldn’t get a shot to fall,” said TJCA head coach Brandon Young. “Kaitlyn Rowe turned it up in the second half and hit five threes for us. That kept us in it and helped build some momentum and we played off that.”

Young liked the way his defense played for the most part.

The Gryphons will host The Master’s Academy next Tuesday.