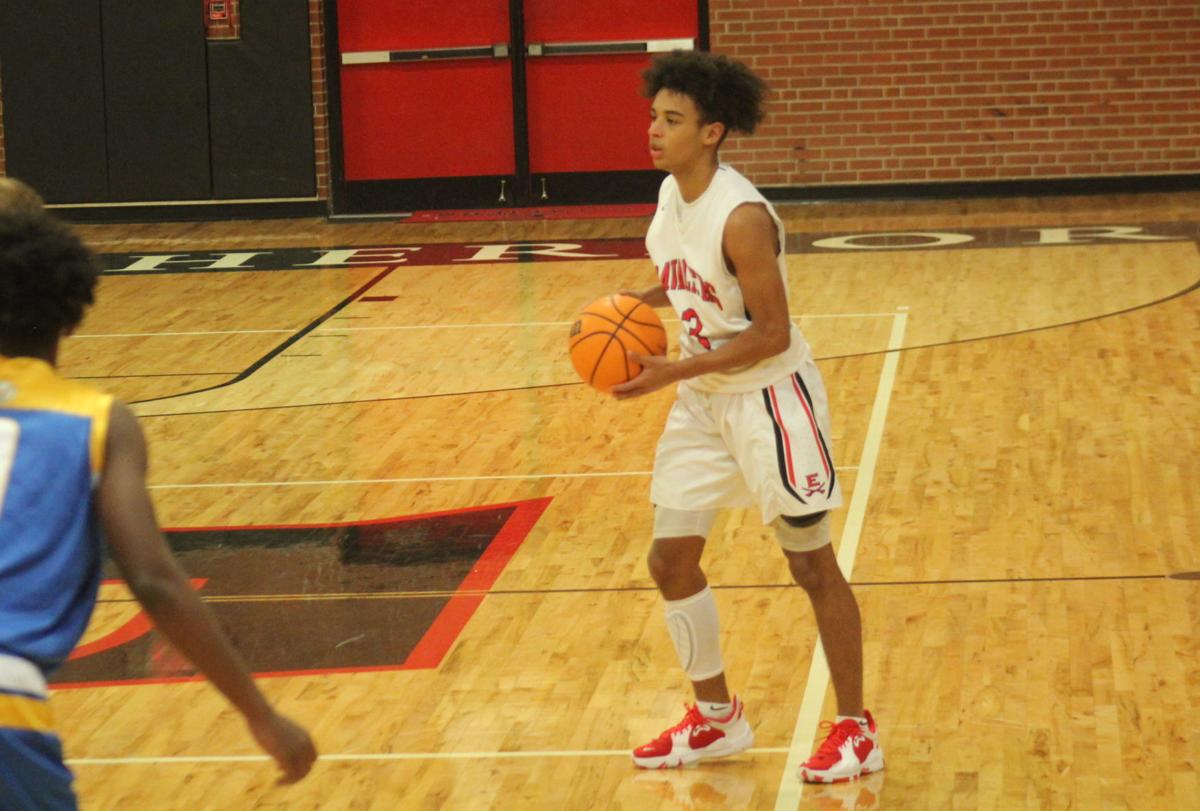 East Rutherford’s Tylier Barksdale looks to make a move with the ball during Friday’s 60-51 win over Highland Tech. Barksdale finished with 14 points. 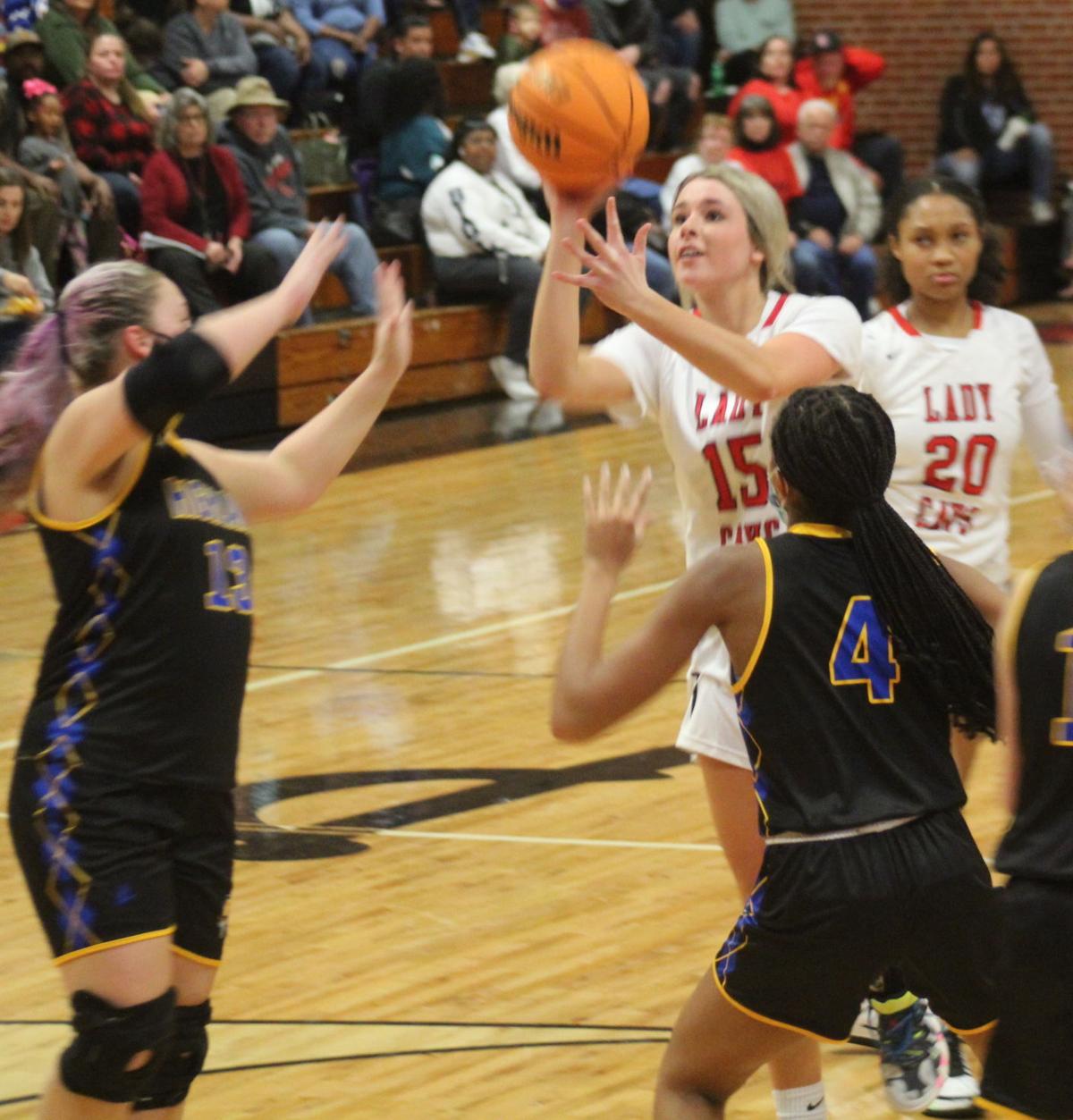 East Rutherford’s Tylier Barksdale looks to make a move with the ball during Friday’s 60-51 win over Highland Tech. Barksdale finished with 14 points.

FOREST CITY — The East Rutherford Cavaliers opened up regular season play on Tuesday night with both the varsity boys and varsity girls team picking up wins over Highland Tech.

Highland Tech’s Bailey Maiers drilled a three to open up the game as East Rutherford struggled to shoot the ball early against the Lady Rams’ 2-3 zone. But Maiers three-pointer would be answered with a 22-0 run by the Lady Cavs behind an aggressive fullcourt pressure, that resulted in seven steals in the first quarter alone. The Twitty twins showed off their athletic ability, combining for 13 first-quarter points. Maggie Marshall drained a three to go along with points in the paint by Skylar Whitaker and Sequoyah Lowrance.

The Twittys continued that dominance in the second quarter, ultimately building a 30-5 lead, behind seven combined points. Whitaker was a force down low as she picked up four points. Marshall drained another three and Kendall Roberts got into the scoring action as East Rutherford held a 36-11 halftime lead. Maiers would knock down two more triples in the second quarter for the Lady Rams to go along with a basket by Addie McCraw.

Seven different Lady Cavs scored in the third quarter as Roberts, Lowrance, Whitaker, the Twittys, Augusta Hardin and Lindsay Padgett got into the scoring column as East Rutherford built a 52-20 lead. Jasmine Twitty would add five more points in the fourth to go along with five from Marshall as the Lady Cavs rolled. Jasmine Twitty led the way with 18 points, while Jaylyn Twitty added 14 points and Marshall collected 11.

“It was a really good first game for us,” he said. “We started out slow, but we were able to get in our full court press and get some transition layups, then we were able to get in our offense and start knocking down some shots. I’m really impressed how the (Twitty) twins led the girls tonight and I’m proud of my young girls too. They came out and played outstanding. It was a good team effort. Everybody got some valuable playing time tonight and got some valuable experience.”

The two teams battled back and forth early, before East Rutherford was able to take control with an 11-3 run in the first quarter, grabbing a 14-9 lead after eight minutes of play behind seven points from Matthew Terry, who finished with a game-high 23 points.

Highland Tech would find its’ rhythm as Luke Whittied scored nine points in the second quarter as the aggressive Rams tied the game at 27 going in to the half.

Neither team could find much offense in the third quarter as Terry and Whittied exchanged baskets, but Highland Tech led 39-37 after three quarters. It appeared the Rams were going to remain in control in the fourth as Kevin Foster hit a pair of floaters, but Terry and the Cavaliers would not be denied. Trailing 45-43, East Rutherford would go on a 12-2 run behind 10 points from Terry and a basket by Tylier Barksdale to go up 55-47. The Cavaliers would handle business from the free throw line to close out the 60-51 win.

“I think it was huge for our guys to pull together in a game-winning stretch,” he said. “I think you learn a lot of things from that and you can take it and talk about the positives. In a stretch like that at the end, you saw a lot of guys doing things well. I think that was important for our bunch. They need to see success at the end of games to continue building that belief.”

“I liked that he didn’t hang his head tonight,” said Kincaid. “He’s a 5-man and it’s going to be physical. He’s going to miss some ones that he probably thinks he should make, but he kept attacking and he stayed aggressive. He didn’t kick it back out, he asserted himself tonight and we told him he was going to be big for us on the inside and he stepped up tonight.”

These teams will meet again next Tuesday at Highland Tech.

The East Rutherford JV Boys opened the season with a 61-42 win.