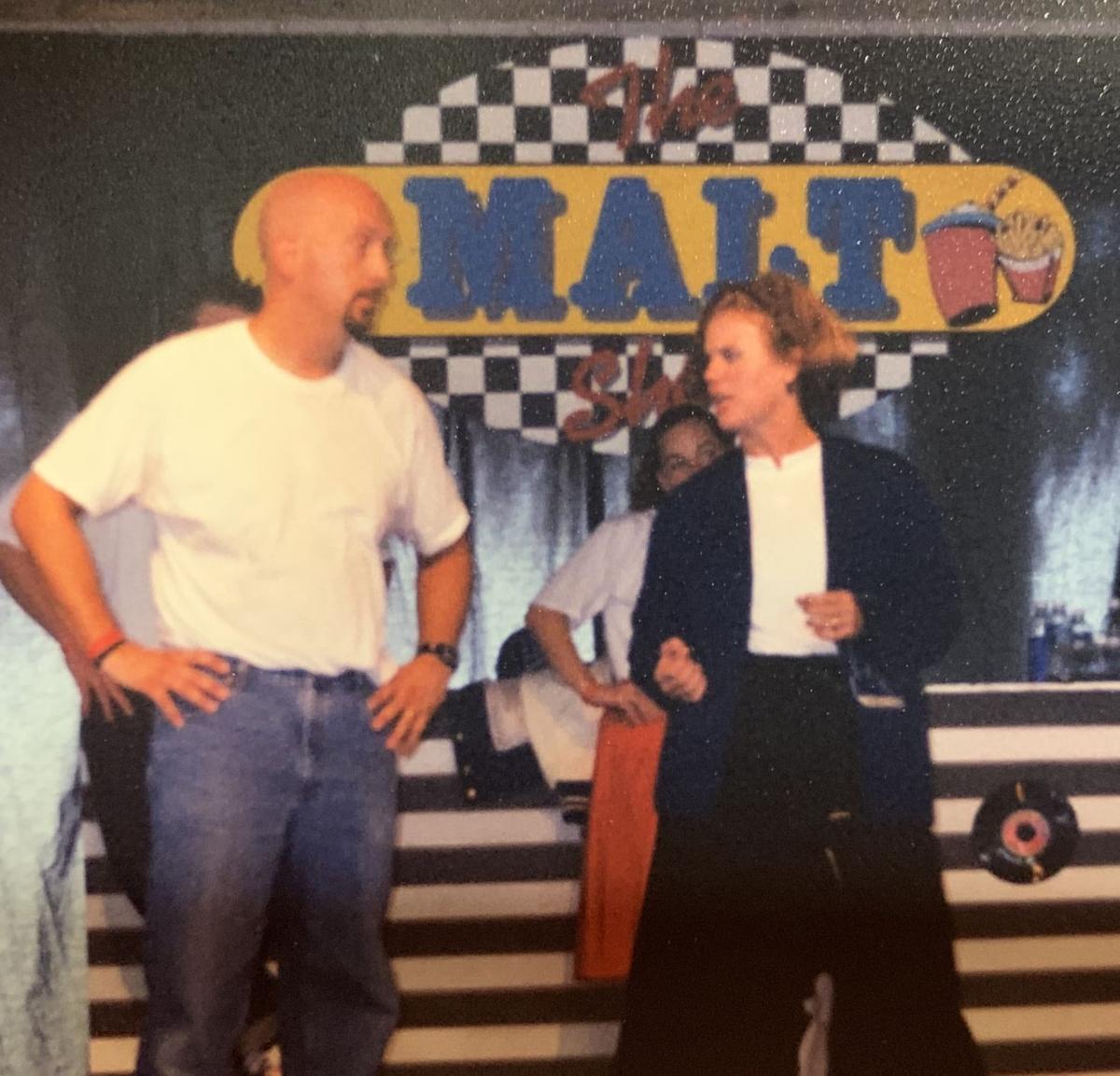 Husband and wife Howie and Stacie Lederfind perform a scene from “Lets Go to the Rock” in 2004. They have been playing the same parts in the ‘50’s style musical for 30 years. 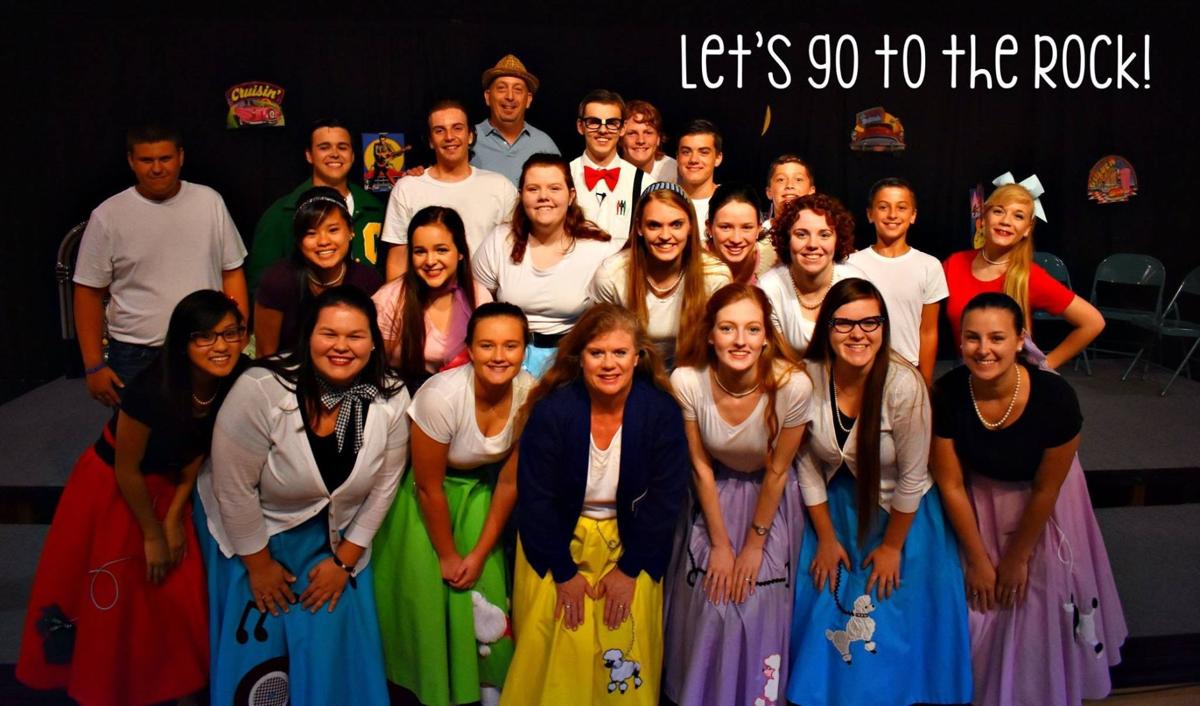 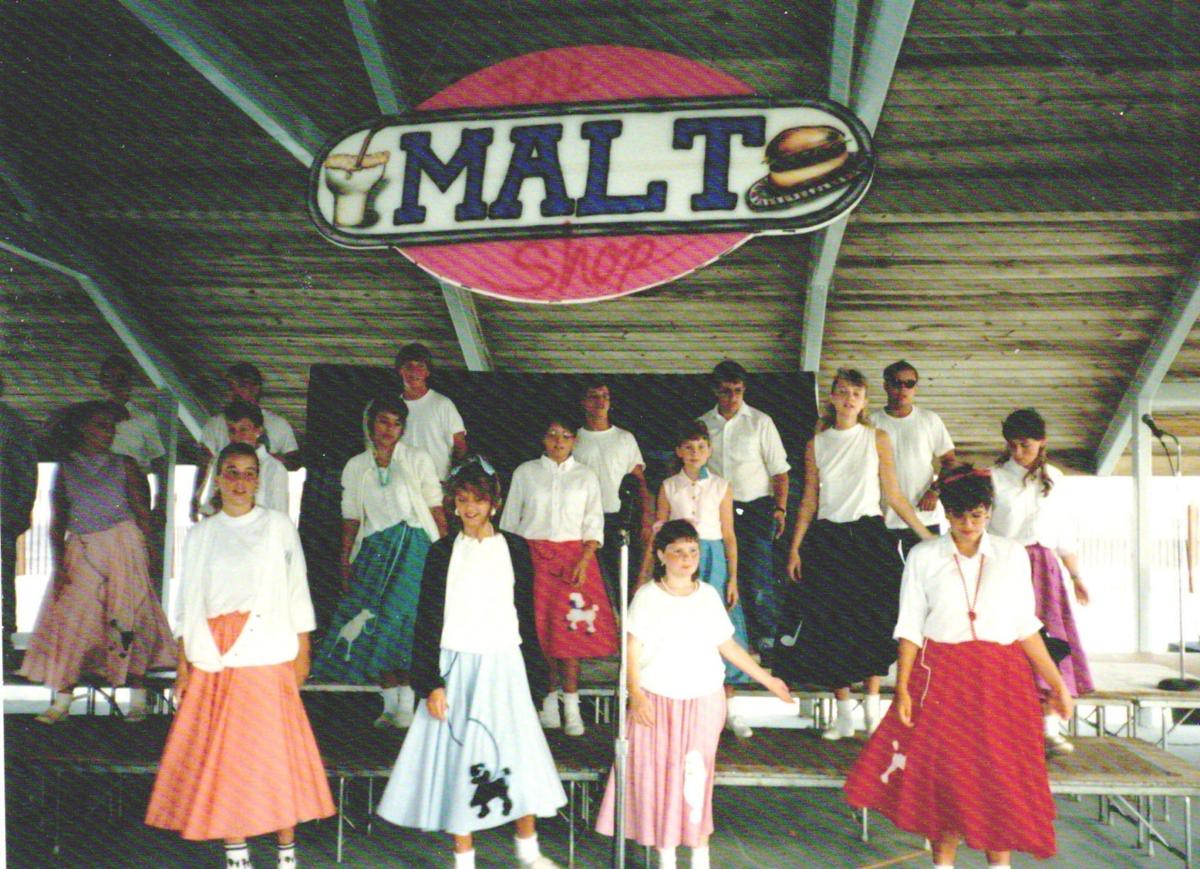 Above: Members of the original cast of “Let’s Go to the Rock” perform on tour in 1990. Thirty years later Howie and Stacie Lederfind are planning a reunion reprisal and have invited members of the original cast and those from other tours to come back and perform. Below: Husband and wife Howie and Stacie Lederfind perform a scene from “Lets Go to the Rock” in 2004. They have been playing the same parts in the ‘50s-style musical for 30 years.

Husband and wife Howie and Stacie Lederfind perform a scene from “Lets Go to the Rock” in 2004. They have been playing the same parts in the ‘50’s style musical for 30 years.

Above: Members of the original cast of “Let’s Go to the Rock” perform on tour in 1990. Thirty years later Howie and Stacie Lederfind are planning a reunion reprisal and have invited members of the original cast and those from other tours to come back and perform. Below: Husband and wife Howie and Stacie Lederfind perform a scene from “Lets Go to the Rock” in 2004. They have been playing the same parts in the ‘50s-style musical for 30 years.

ELLENBORO — What do you get when you cross the songs and style of Grease with the evangelistic message of a Sunday sermon? The result is “Let’s Go to the Rock,” a 1950s style youth musical portraying themes of mercy and for giveness.

Howie Lederfind, youth minister at Liberty Baptist Church in Ellenboro, and his wife Stacie, have been performing the show with their youth groups for nearly three decades. This year marks the 30th anniversary of the inaugural tour.

“I think everybody relates to ‘50’s music,” Howie said. “Even for those who are not from that era, it’s iconic and nostalgic. Everybody knows the poodle skirts, the fast cars, the diners and the music is timeless.”

“A lot of time people are drawn in by the music, costumes and set pieces that may not come to hear a sermon,” Stacie added. “It’s just a fun and unique way of sharing the Gospel and that’s the most important thing.”

To celebrate the 30th anniversary, the Lederfinds have planned a special reunion reprisal for one night. It will take place June 6 at Stonebridge Campground in Maggie Valley, in conjunction with Christ Cares 4U Ministries.

“We were asked to do a show there on our next tour and we thought why not go ahead and do one special show and invite the cast to come back from the last 30 years,” Howie said. “It’s going to be so much fun. We have had a lot of interest from people, but the best thing is just sharing memories of the past 30 years.”

“Let’s Go to the Rock” was written in 1989, and the Lederfinds first performed it at their home church Capital View Baptist (Columbia, South Carolina) in 1990. It is set in modern times, but the story unfolds as a series of flashbacks to the 1950s, as the main characters relate a life-changing event from their teenage years.

“Our pastor was a theater major from Gardner-Webb and he was looking for new ways to present the Gospel,” Howie said. “He brought the musical to our attention and we have been performing it off and on ever since. We love it.”

The Lederfinds also credit the musical for their engagement.

“At one of our practices 30 years ago, we got up on stage to announce that it was somebody’s birthday,” Howie said. “Everybody thought we were going to announce we were getting married. On the way home, Stacie asked if that bothered me. I said no. She said it didn’t bother her either, so I was like, ‘Well then, do you want to?’ and she said yes.”

Throughout the next three decades, “Let’s Go to the Rock” has remained a family affair for the Lederfinds. Their children Joel and Ainsley have grown up with the musical, performing in it as teenagers.

“We try to space it out where every member of the youth group gets to be in it at least one or two times,” Stacie said. “Joel and Ainsley got to dress up in the outfits from the time they were very little and preformed three times. It’s something we enjoy doing as a family.”

Howie and Stacie have now led seven tours of “Let’s Go to the Rock” with the most recent coming in 2017. They have taken the tour to a variety of venues including churches, malls, schools and even prisons

“We are usually gone seven to 10 days and tour mostly in the Southeast, but we have been as far as Ohio.” Howie said. “We have about 20 to 30 cast members and it takes about nine months to plan. It’s not a vacation. It’s hard work but so many kids tell me it’s one of the most rewarding experiences of their lives.”

“I would say every place we have been to has welcomed us,” Stacie added. “Some of the Baptist churches have been a little concerned that we have some dancing in the program. In that case, we just call it synchronized body movements,” she continued with a laugh..

Both Howie and Stacie admit that there have been plenty of ups and downs through the years.

“Sometimes we have had six people show up to a show and as many as 200,” Howie said. “Either way, I tell the cast that it doesn’t matter. Do your best, share the love of Jesus and have fun.”

According to the Lederfinds, their most rewarding experience came while performing at a juvenile detention center in South Carolina.

“It was a rougher crowd,” Howie remembers. “They were whistling at the girls and talking during the performance. But as it went on and they started to listen, you could see the change. You could hear a pin drop. They were connecting to the message of forgiveness. About 30 people made professions of faith that night. That made it all worth it.”

Howie and Stacie are planning another tour in 2022, with hopes that one of the venues will be POPS in Forest City, but for now they are focused on the 30th anniversary reunion reprisal.

“We start practice on February 9,” Stacie said. “It’s crazy to think that our first group is in their 40s now. We will have to modify some things because it gets harder and harder to play a teenager the older you get, but when people think of John Travolta and Olivia Newton John, they see them as teenagers. Maybe we can be the Baptist version.”

“I want to keep doing it as long as I can,” Howie added. “It’s like riding a bike. Once we start going through the lines and songs again, it’s easy to pick back up. My dancing may have slowed down a little, but I think that people of all ages still relate to the music and the message and it’s a wonderful way to share God’s love. That never gets old.”