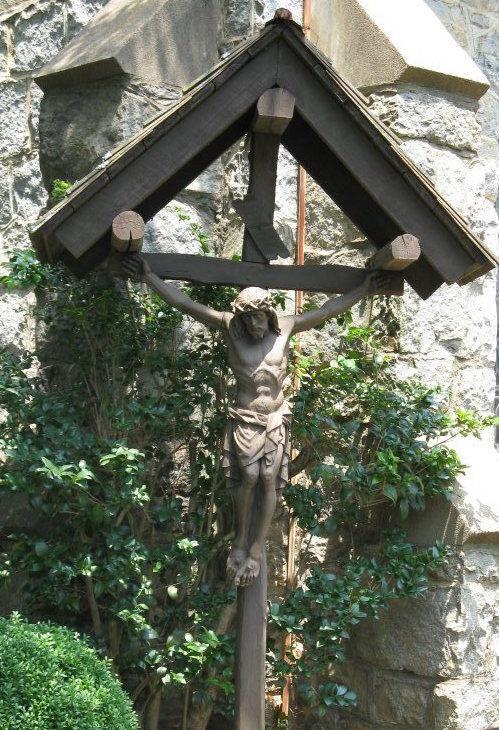 Today is Good Friday, remembered by most Christians worldwide as the day Jesus was crucified. This wooden crucifix, on the grounds of St. Francis Episcopal Church in Rutherfordton, was crafted in Germany. It was installed at St. Francis in 1941.

Ethan Lively (left), of Tennessee, won the Battle Round against Avery Roberson (right) of Rutherfordton. However, Avery was “stolen” for the team coached by Kelly Clarkson, and will also advance in this season’s edition of “The Voice.”

RUTHERFORDTON — Avery Roberson of Rutherfordton advanced to the next round on the popular television singing talent show “The Voice,” this week, but it was not without drama.

In the “Battle Round,” Avery and fellow contestant, country singer Ethan Lively, together sang “Just Got Started Lovin’ You,” by James Otto. The song was Otto’s first number one song, and the number one country single of 2008.

Each of the four celebrity judges, Blake Shelton, Kelly Clarkson, Nick Jonas, and John Legend, has a team of contestants. In the battle round, contestants from the same team, perform a song together. Afterward, the judge chooses which contestant wins the round and advances in the competition.

The contestant that isn’t chosen as the winner, can then be either “saved” by the team judge, or “stolen” and continues in the competition as a member of another team. Usually, only one of the performers advances, as each of the four judges has only one opportunity to “save” or to “steal” from another team.

Avery, who is 20 years old, and Ethan, who is 17 years old, gave a rousing performance, that all of the judges clearly enjoyed.

“This is awesome,” Jonas said during the performance.

After the performance, Jonas said at first he didn’t know who he would choose, but when pressed, he said he would give the edge to Avery.

Legend said, “In this moment, Ethan did a little better.”

Singer Kelsey Ballerini was substituting for the evening for Kelly Clarkson, but could be seen texting her through the performance.

“I’m blushing,” Ballerini said. “I really enjoyed it. I felt like I was serenaded.”

Before giving his decision on who would advance on Team Blake, Shelton stood and applauded, saying of the performance, “That’s what steals are made for!”

He praised both of his performers.

He then announced his decision.

“Based on what I just saw happen, the winner of this battle, is Ethan,” Shelton said.

“That was my first steal, and it felt good!,” she said.

Praising Avery’s talent, Ballerini said Clarkson sent her a text message instructing her to steal Avery for her team.

In the Knockout Round, Avery will be paired with another member of Team Kelly. But this time, artists choose their own song and perform individually while their direct competitor watches and waits. The judges again choose the winner from the pair, and the artist not selected is available to be stolen by another team.

Winners of the Knockout Round advance to the fourth and final phase of the show, the live performances, which are broadcast live on television. Winners are determined by audiences votes. The ultimate winner of “The Voice” receives a recording contract.

“The Voice” airs on the NBC network, Mondays at 8 p.m.. The local NBC channel is WYFF Channel 4. For information on “The Voice,” visit www.nbc.com/the-voice.

The historic Bechtler House will reopen for tours April 8. It closed a year ago, because of the COVID-19 pandemic.

RUTHERFORDTON — The Bechtler House Heritage Center, headquarters for the N.C. Gold Trail, is welcoming back visitors after being closed for a year, due to the COVID-19 pandemic.

The Bechtler House will officially reopen for tours April 8, with a spring schedule of Thursdays 2-4 p.m. and Fridays 10 a.m.-2 p.m. Beginning in June, the center will add the first Saturday each month from 11 a.m.-1 p.m. It will be open at other times by appointment.

Officials said throughout the year, gold history buffs and others have contacted the center for information on the Bechtler story, and a possible reopening.

The Bechtler Heritage Center is located at 130 W. 6th Street in the historic district near downtown Rutherfordton.

It was the home of Christopher Bechtler, who arrived in North Carolina in 1830, bringing his skills as a jeweler, watchmaker, inventor, and gunsmith. Bechtler minted America’s first $1 gold coin, 17 years before the United States Mint. The Bechtlers minted more than $2.24 million dollars in gold coins, stimulating commerce in the Southeast, leaving a permanent legacy to both Rutherford County and in American history.

The Bechtler House is now owned by the town of Rutherfordton, since the Tourism Asset Foundation (TAF) ceased operations at the end of 2020 and transferred ownership to the town.

The Bechtler House was first opened to the public by the Rutherford County Tourism Development Authority (TDA) in 2012, for Rutherfordton’s 225th anniversary. TAF managed the property, which it originally purchased in partnership with the town, after it was formed in 2013 (by TDA). Also during this time, a small park was created at the Bechtler Mint Site and includes walking trails, benches, and the “Hidden Floor of Gold” interactive exhibit.

“It is very important that we keep the history of Rutherfordton alive for future generations,” said Rutherfordton Mayor Jimmy Dancy. “The Bechtler story is a very important chapter in the existence of our community. All of our citizens should take pride in the preservation of this moment in time, of the ‘Carolina Gold Rush.’ The Bechtler family was vital part of our proud history and the Bechtler House will allow Rutherfordton the opportunity to continue reliving the excitement of gold.”

The Bechtler legacy is a part of the town’s branding, and attracts visitors from all across the nation.

Deborah Millikan is manager of the Bechtler House and the N.C. Gold Trail.

“Our mission is to bring America’s first gold rush to light, by providing educational opportunities to explore the gold history in Rutherfordton and throughout North Carolina,” Millikan said.

In the year prior to the temporary shutdown, the Bechtler House received approximately 2,500 visitors. Millikan says they came from throughout the region, and as far north as New Jersey, and as far west as Nevada. Some of the visitors heard about the Bechtler House through their interest in gold mining. Some learned about it from visiting other gold trail counties in North Carolina.

“Christopher Bechtler was a visionary and entrepreneur that helped further the importance of Rutherfordton in the pages of history,” said Doug Barrick, Rutherfordton town manager. “The preservation of this home by the town, shows the significance of our community’s passion to preserve our history and to ensure that tenancy is showcased for future entrepreneurs of our community. We are delighted with the progress that TAF has made and we are honored to continue the Bechtler legacy through the commitment to preserve this important landmark.”

To learn more about the Bechtler legacy, visit the website www.visitncgold.com. For more information, contact Millikan at 828-351-9575.

Lee Newton has released her first CD as an Outlaw Country singer and songwriter.

SHELBY — Despite the grip of the coronavirus pandemic, the past year has been anything but idle for Outlaw Country Music singer and now songwriter Lee Newton.

Last Saturday marked the latest highlight as scores of family, friends and fans attended Newton’s CD Release Party at the Dragon Fly in Shelby. The celebration marked the official release of the singer’s first CD, “Undamaged,” a collection of three original songs.

“This was such a celebration of all the hard work that has went into the making of this album over the past few months,” said Newton, formerly of Forest City and who now resides in Shelby.

One new fan traveled across the country from California to attend Saturday’s party.

“She had first heard my song, “Strength of a Woman,” and she became a Lee Newton supporter,” Newton said. “She said my song changed her life and gave her hope. This song has got so much recognition all over the world. This is an anthem song for women that are struggling that their is hope. To hear the stories that my song has touch their lives is what it’s all about.”

Fans have been posting their appreciation of Newton’s work on Facebook.

“I love this song,” Diane Boling Buckner posted about “Strength of a Woman.”

“You are a great singer,” she added.

Throughout her journey, fans have been peppering Newton with support and glowing feedback on social media.

“I told you a long time ago you would make it big one day and you are well on your way,” Kathy Aldridge Grayson recently posted on Facebook. “Just keep God at the center of your life and you’ll never go wrong. May you have all the blessings in life you deserve. I love you bunches!”

Once the pandemic caused her to be laid off from her full-time job, Newton used the time to revive her musical career by starting to write songs and cover other artists on social media.

Last year, Newton earned the title of Vocalist of the Year at the 6th annual Josie Music Awards, winning the multi-genre category award. She did so having never released any original work.

She followed that with writing and recording her first original song, “Daddy’s Little Girl.” The ditty is a tribute to her late father, who instilled her passion for music when she was a child.

Next, Newton teamed up with legendary music director Bill McDermott at Omni Studios. McDermott has been involved in the illustrious careers of George Strait, Tim McGraw, Martina McBride and others.

“As I have went through this journey some amazing doors have opened up for me musically,” Newton said.

April looks to be another busy month as she return to Nashville. On April 18, she’ll part of a virtual show — Ladies Who Rock for a Cause — that will appear on Facebook.

There’s another big announcement coming, though she can’t reveal any details just yet.

For the time being, she remains active on Facebook where she performs songs and other comedic bits that flash her talent for entertaining. She’s also been filming videos and engaging in interviews.