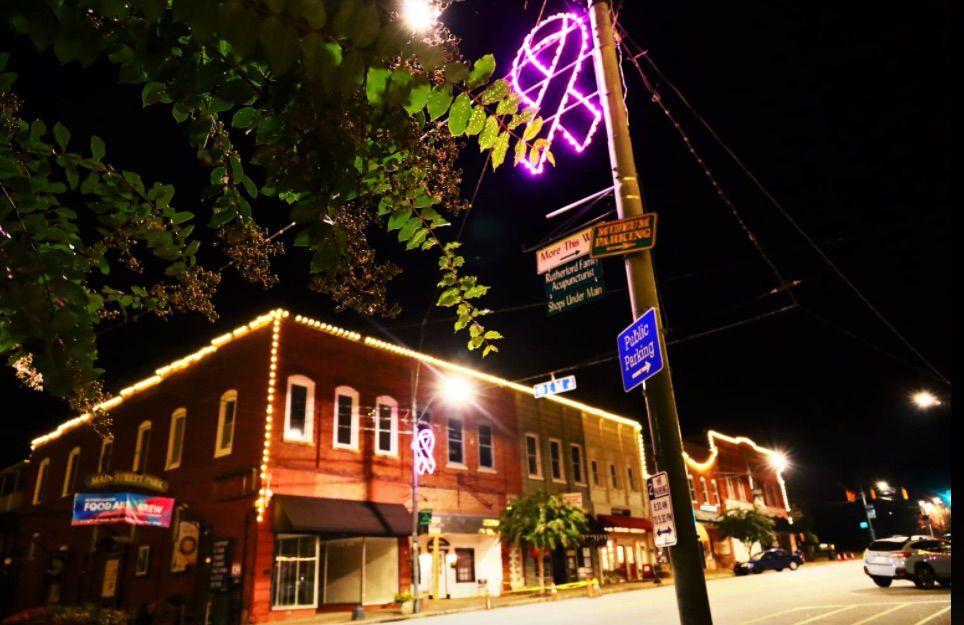 Over the past few years, the town of Rutherfordton has hosted a “Pink Out” during the month of October to raise breast cancer awareness and funding to support the Community Health Council’s Cancer Patient Assistance Fund.

RUTHERFORDTON — Part of its 2020 grant cycle, the RHI Legacy Foundation awarded more than $1.5 million in funding toward various nonprofits and municipalities to promote health-related programs and projects throughout Rutherford County.

Typically, the Foundation provides one grant cycle each year; however, additional funds were made available this year to address community needs caused by the COVID-19 pandemic.

“It was a pleasure to complete our seventh grant cycle in 2020,” said Beth Miller, chairwoman of the RHI Legacy Foundation Board of Trustees. “This year, especially, we are grateful for many organizations that have served as a safety net for our community. We were pleased to be able to be flexible with our funding and to respond quickly as the community needs grew.”

The focus areas include:

An additional five requests were provided to the Rutherford Regional Auxiliary for review and funding. Funds from the Auxiliary are raised through volunteer efforts and jewelry sales offered at the hospital. The Auxiliary approved five grants for $33,234. These awards were approved for:

Safe Kids of Rutherford County — $9,800 for childhood injury prevention; and

Jill Miracle, community impact director for the Foundation, stressed the importance of collaboration toward attaining the community’s health-related goals.

“We believe that partnerships and relationships are keys to identifying and resolving issues that affect our county,” Miracle said. “In early 2020, when the impacts of the coronavirus were first being felt, we reached out to food distribution agencies where we already had existing relationships. Those partners were invited to apply for funding specifically to address those impacts. As a result, we were able to quickly award $207,450.10 in assistance to help serve their clients in need.”

As the year of COVID-19 progressed, Foundation leaders recognized the adverse impact on revenue from local athletic programs. Because of lost revenues from gate and concession sales and booster club efforts, sports programs were not able to generate necessary revenue for athletic equipment and training to keep student athletes safe. In September, each area high school athletic program was awarded $12,500 to supplement their sports programs.

Since its inception in 2015, RHI Legacy Foundation has allocated over $12 million to nonprofits and municipalities to create or expand health-related services, to meet the basic needs of county residents, and to provide additional avenues for outdoor and recreational activity.

For a more detailed outline of all of the 2020 grants awarded by RHI Legacy, please see a future edition of The Daily Courier.

Lacie Felicia Boykins, 40, of Shelby, pleaded guilty to five counts of embezzlement by a public official/trustee on Sept. 30. Despite admitting to stealing cash proceeds over a 5-year period, the first time offender received a suspended sentence that keeps her from going to jail.

Suspicions of Boykins’ embezzlement first surfaced on Jan. 11 when another employee noticed something afoul. The employee then alerted administration. On Jan. 23, Boykins was placed on administrative leave to allow for an internal investigation, one handled by the sheriff’s office.

The investigation confirmed the embezzlement, which led to the charges on July 24.

“Unfortunately, I had not changed how that (payment for concealed-carry permits) was handled when I became sheriff,” Francis said of the original process. “We have more checks and balances now. She understood the system and knew how to manipulate it.”

Each count for embezzlement represented one for each year, Francis said.

According to the office Clerk of Superior Court, Boykin’s sentence included a minimum of 6 months and a maximum of 17 months incarceration suspended for 60 months under supervised probation. She must make full restitution of the amount embezzled. Court costs is subject to a civil judgment, but not the restitution. Boykins is to complete 40 hours of community service. Fees for her probation supervision and community service were waived.

Employment records show Boykins began her employment with the sheriff’s office on May 4, 2012. Her annual salary was $32,673. She was effectively dismissed Feb. 6.

Law enforcement agencies often refer internal investigations to the State Bureau of Investigation to avoid any conflict of interest or the appearance of such. Those deferred probes, however, typically involve sworn officers.

“There was no need to do that. We were able to do the investigation ourselves,” Francis said.

SPINDALE — Rutherford County suffered its 10th coronavirus death this week after two more residents died, according to Friday’s update by the health department.

Health officials reported the additional deaths, bringing the cumulative total of COVID-19 fatalities in Rutherford to 54. The latest update also reported another spike in positive cases with 32, for a total of 1,528 cases locally.

There are 174 active cases, nine more than Thursday’s update. Presently, 23 victims are hospitalized for an increase of two over a 24-hour period.

A number of states are experiencing a renewed surge in positive cases and deaths related to COVID-19. If the spike continues more public restrictions could be implemented.

SPINDALE — A total of 2,079 Rutherford County citizens cast ballots in person Thursday, the first day of the One-Stop Early Voting period. Some were in line at the two polling sites in Rutherfordton and Spindale before the sun came up.

There were lines for much of the day, but Dawn Lovelace, Rutherford County elections director, said they moved rather quickly. Eager voters showed up again on Friday, as voting has remained brisk.

During early voting, voters can choose between the two polling sites — the Spindale House and the County Annex building in Rutherfordton, unlike on Election Day (Nov. 3), when voters must go to their assigned precinct based on where their physical residence.

“Voting has been steady since the beginning,” Lovelace said. “We were told by state elections officials to be prepared for a heavy turnout, and we are. We have the staff and resources in place. So far everything has gone smoothly.”

This election is like none other, as the nation continues to experience the COVID-19 pandemic. Social distancing is required inside the buildings, workers are required to wear masks and voters are strongly encouraged to wear them. Hand sanitizer is available.

“We have not seen any problems so far,” Lovelace said. “Most everyone is wearing a mask. The CDC recommends it, and we’re glad most people are wearing them. It makes people more comfortable and we want to be as safe as possible.”

Despite the new safety protocols, Lovelace says voters have been cooperative.

“There have been no big disruptions. People have not been argumentative,” Lovelace continued. “Everyone is showing respect, which is what we wanted.”

For voters who are wanting to go to the polls at a “less busy” time, Lovelace says mid-morning or mid-afternoon are the best bets.

“Before work, lunchtime, and just after work, are typically the busiest times at the polls,” she said.

Lovelace wants to dispel a rumor that has spread on social media regarding the validity of ballots that an election worker may write on.

Ballots, she said, are not invalidated if an election worker writes on them. The State Board of Elections issued a statement on this matter Thursday.

“For all absentee ballots, including one-stop early vote ballots, election workers write an identifying number on your ballot,” the statement reads. “This is a special number assigned to each ballot and voter as required by law.

“This number allows the ballot to be retrieved if necessary based on a voter challenge, such as if the voter dies before Election Day or double votes. It can also be used to retrieve ballots in the event of a successful election protest, such as if several voters are given the wrong ballot style and the margin for a contest is less than that number of voters,” the statement continued. “Election Day ballots are not retrievable and will not have writing on them unless they are provisional ballots, in which case they may be marked with a “P.”

“We are heading for a record voter turnout,” Lovelace added.